Part two – Is the erosion in trust in our institutions a sign of terminal decline? Or can they adapt to a changing context? 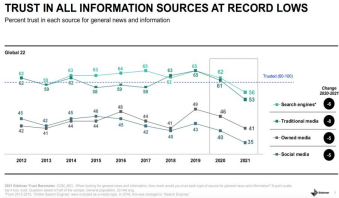 In part one of this essay we discussed how the increasing digitality of society has coincided with a relative  decline in US and Western hegemony. In part two, we try to understand why the tools and institutions that made liberal democracies successful in the 20th century are now failing them in the increasingly digital 21st century.

The crisis in Western hegemony can be characterised by an erosion of trust in many of the foundational beliefs and institutions upon which Western society is built. Whilst there are many types of trust,  specifically I am referring to institutional trust and generalised trust – trust in one’s peers in general and  trust in the institutions of the state. Trust in the mechanisms of security is a record low. Driven by failure in  the War on Terror and Afghanistan, in the past five years, trust in the US military has dropped significantly  within the US; a 2021 poll by the Reagan Institute found that 56 percent of Americans surveyed now said  they have “a great deal of trust and confidence” in the military, down from 70 percent in 2018.  Researchers saw a similar drop in confidence in law enforcement in recent years (down from 50 percent to  39 percent). According to Roger Zakheim, Director, Ronald Reagan Institute: “Americans are experiencing a  sense of pessimism in almost every question [regarding] confidence or trust… The numbers are generally  ticking down”.

Much of this mistrust is driven by the ideological war being played out in the digital and media space. This  is driven by the use of digital for radicalization, asymmetric warfare, ideological aggression, direct cyber attacks and warfare. Western military and regulatory institutions are increasingly focused on this emerging  digital frontier. US Federal government spending on cybersecurity is rising sharply, estimated at around  $18.8 billion USD in 2021-2. As well as declining trust in the mechanisms of security, there has been a  decline of trust in our political institutions. On both sides of the Atlantic, trust in politicians is at historically  low levels. OECD research found that in 2022 only 50 percent of citizens trust their government – a figure  trending downwards. Many technologists have stated their concerns about the ability of our democratic  institutions to survive the rise and disruption of the digital age, whilst others say the digital revolution  renders traditional democracies incapable of meeting the obligations of governance in a fast moving, agile  world dominated by global corporate tech giants. Certainly, governments have failed miserably in their  objective of taxing these tech-monsters, and without tax revenue, government grinds to a halt.

Meanwhile, in the age of fake news and alternative facts, figures show trust in the media has declined by  around 10 percent on average over the last decade. According to the Edelman Trust Barometer:“The  ‘global infodemic ’has driven trust in all news sources to record lows with social media (35 percent) and  owned media (41 percent) the least trusted; traditional media (53 percent) saw the largest drop in trust at  eight points globally.” The rise of digital media has led this downward trend, with social media the least  trusted source of all. The digitisation of media has lowered the barriers of entry to publishing and  distribution, whilst algorithms, data and dynamic media have provided us with tools that increase its  potency and addictiveness. Research by The World Economic Forum shows that by selecting what  information reaches which users, digital media can alter human decisions and pose risks to civil society. As  Anna Lembeke puts it in her book, Dopamine Nation, if digital media is the drug, the mobile phone is the  “modern-day hypodermic needle”.

Digital media has become a battleground of the hearts and minds. Whilst radicals have used it as a tool to  influence the vulnerable, state and state-sponsored propagandists seek to influence opinions and even  affect the outcome of elections. Examples include the Cambridge Analytica scandal, to Princeton University  research showing how Twitter affects voting decisions, to Carole Cadwalladr’s investigation into Brexit and  the influence on that vote by… ‘A shadowy global operation involving big data, billionaire friends of Trump  and the disparate forces of the Leave campaign…’. The rise of digital media has led us to become increasingly less confident in our information sources and more susceptible to influence.

Our financial institutions have also been undermined by a decline in trust. The 2008 financial crisis  destroyed trust in central banks and governments to effectively manage money supply and the economy.  Even a decade later, the majority of Britons did not trust banks and thought they did not face severe  enough penalties for their part in the 2008 financial crisis. In 2021, whilst the COVID-19 pandemic saw  some recovery in trust for banks, confidence in the financial sector as a whole took a tumble. More  generally, rising financial inequality over the past three decades has driven down overall levels of trusts  amongst peers in society. Trust is always lower in societies where the difference between the wealthiest  and poorest is higher. In the OECD, the average income of the richest 10% of the population is about nine  times that of the poorest 10 %, the highest level for the past half-century.

The emergence of new digital elites able to exponentially scale their capital, with a whole range of digital  tools and armies of experts to help them to avoid the attempts of state apparatus to effectively tax them  and redistribute wealth, widens the gap between the richest and the rest. Uncertainty and fears of social  decline and exclusion have even reached the middle classes in many societies. The rich and educated are  far more likely to have access to the exponential toolkit of digital wealth creation tools Pew Internet & American Life Project.

Trust in Western security, economic, media and political institutions has declined, in part because they are  analogue institutions in an increasing digital society and economy. Without institutional reform, the  problem will only accelerate as society digitizes further. The COVID-19 pandemic has accelerated digital  uptake, while half the world’s population are now online with most of the other half forecasted to be  connected by 2030. These two trends are inextricably linked, with digital providing the tools that are  transforming our society and economy, but at the same time undermining trust in the established  analogue institutions of Western society and state. These are institutions designed to work in a world of  limited access to information and knowledge, where the institution was able to act as gatekeeper to  information and facts.

Without this analogue monopoly on information, trust and credibility has declined. As Western society has  digitised, it has ‘lifted the veil’ on the inner workings of the Western institutions of government, society  and the economy and people do not like what they see. In the 21st century, in an increasingly digital  context, free, democratic, liberal, western society governed by analogue institutions conceived in the 19th  and 20th Century is at risk. Furthermore, many decisions now made debated and dissected in the full view  of a digital citizenship appear absurd to the viewer. This is called the ‘fallacy of composition’ and occurs  when people apply the logic of their individual context to institutional, state level decision making. This  applies to topics such as the ever expanding national debt and complex and seemingly inconsistent covid  mixing rules.

What can be done to stop this decline? In the next article we will explore how crypto might solve some of  these problems and offer an antidote to the West’s ills.

We have had a number of readers ask for a link to the Pan European survey being organised by 2Tokens in  Holland. As a reminder, raising funding through tokenisation is rapidly developing. But will these new  tokenised financing solutions be able to really help organisations when it comes to raising capital?

We would appreciate your thoughts and input which should only take 5 minutes of your time. No prior  technical knowledge of tokenisation is needed.

This is the link to the survey