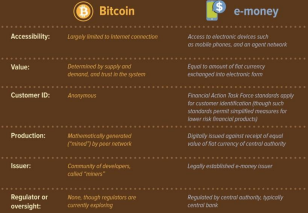 The need for digital wallets was initially only required for those cyber punks looking for ways to send, receive and trade crypto currencies and avoid the necessity of dealing with banks and other regulated  financial institutions. However, as we see an ongoing interest and the development of Digital Assets in various formats, there is a corresponding demand by more users for digital wallets.

Difference between a cryptocurrency and e-money

What is a digital wallet?

According to Bankrate in the US: “Digital wallets are exactly what they sound like: a digital version of your  financial accounts made easily accessible via computer, smartphone or smart device that ultimately  eliminates much of the need to carry around an actual wallet. Apple Pay, Google Pay, and Samsung Pay are  probably three of the most popular digital wallets, but there are quite a few others. Some other popular  digital wallets include PayPal and Venmo, both of which are uniquely social by allowing you to easily send  money to retailers and friends”.

• Hot wallets – where your assets are kept on-line. Arguably less secure as since they are on-line, they  can be hacked.

• Cold wallets – are hardware devices not dissimilar to a USB stick, holding a record of the Digital  Assets you own. Are more secure as they are only on-line when you plug them into a computer/laptop.

Both types of digital wallet do not actually hold your Digital Assets in the same way that a paper wallet  holds physical cash but can be seen as a way to access those of your assets which are held on a blockchain.  The range of Digital Assets is expanding, so digital wallets are not only used for cryptocurrencies but also  for Central Bank Digital Currencies (CBDC), Non-Fungible Tokens (NFTs) and, increasingly, other real assets  now being offered with a ‘digital wrapper’. As the infrastructure and regulation is clarified in different  jurisdictions, we are seeing digital wrappers being applied to traditional fiat currencies such as £, $, CHF,  Yen, € etc, and to other assets such as equities, bonds, commodities, real estate etc.

The on-line stockbroker, Robinhood, was only established in 2013 in California but already has over 22.5  million customers. Robinhood is set to launch its own digital wallet whereby making the trading and  storage of cryptocurrencies and other Digital Assets much simpler, and has recently reported that over 2  million people have registered with it to open a digital wallet. However, this pales into insignificance  compared to the number of people who own a Chinese central bank digital Yuan wallet, since there are  over 260million of these. The digital Yuan, officially known as the e-CNY and issued by the world’s second  largest economy, has been in the development phase since 2014 and is set to be launched at the Winter  Olympics in Beijing which is starting on 4th February 2022.

87 countries which represent over 90% of global GDP are developing digital currencies, which are more  accessible for people without bank accounts. But there are concerns with CBDC. For example, in  jurisdictions such as China, they could be used to automatically fine citizens for disallowed activities such  as jaywalking (where facial recognition cameras are already being used to send fine notifications via text).  The Chinese claim their state-run digital wallet will not replace the hugely popular payment apps such as  Alipay or WeChat Pay, however, those providers cannot be used at the forthcoming Olympic Village, whilst China’s digital-wallet can be….

On a personal note, if you have not already obtained a digital wallet for your Digital Assets, it is likely that it  will not be long before you do!

After two years of the COVID-19 pandemic and two decades of economic, political and social crisis, is crypto the ‘shot in the arm’ the West needs?