After two years of the COVID-19 pandemic and two decades of economic, political and social crisis, is crypto the ‘shot in the arm’ the West needs? 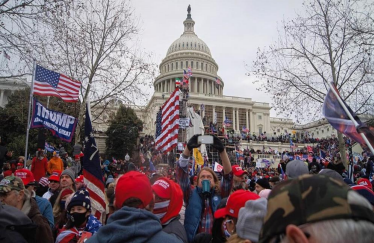 Part one of a three-part essay written by James Moffat, CEO of New Future Foundation

Since the fall of the Berlin Wall in 1990, the high watermark of West and US hegemony, the subsequent  two decades have been characterised by a series of economic, political and social crises that have rocked  the almighty US-led Western consensus to its foundations. Today in the West, political violence is on the  rise, armed protests are surging, the EU is consumed with challenges and still reeling from Brexit; in the  United States, half the population believes in the likelihood of another civil war.

Source: Photo by Tyler Merbler from USA, CC BY 2.0

What has led to this dramatic turnaround in fortunes, and does the crypto-economy offer an opportunity  to stem the tide?

The decline of an empire and rise of the Web

In 1999, Fukuyama proclaimed the end of history. He claimed that from the French Revolution, to the  dawn of the new millennium, Western liberal democracies had repeatedly proven to be a fundamentally  better system for organising (ethically, politically, economically) than any alternative. The Western liberal  capitalist democracies had triumphed in the war of ideas and, whilst events would continue, there was  now a global acceptance that the Western liberal economic and political order was the de facto, best way  of organising society. Around the same time, the Dot Com Bubble was reaching its zenith and poised to  burst. Many commentators said the internet was a fad that would never catch on. One of the more notable  commentators who predicted the irrelevance of the internet was the Nobel Prize-winning economist Paul  Krugman who, in 1998, said the internet’s impact on the economy would be no greater than the fax  machine’s. So many, no doubt, felt proved right when at its height, the NASDAQ Composite Stock Market Index rose 400 percent before collapsing back by 78 percent in October 2002.

Fast forward to 2022 and neither prophecy stood the test of time. The web is ubiquitous. Yes, there was a  bubble, and it did go pop. But the survivors have created a new world order, a new digital-first reality for  the half of the world population who have access to it. New companies utilising technologies that didn’t  exist or were considered science fiction 20 years ago, now dominate our daily lives and are the highest  valued organisations in the world – five of them making up one fifth of the value of the S&P. Right now,  riven with ideological division, and losing ground on all fronts to China and its rivals, the American-led  Western hegemony looks beleaguered; stunned by 9/11, rocked by the 2008 financial crisis and besieged  by COVID-19. Twelve months ago, the world watched as the symbol and inner sanctum of the Western  liberal democratic order – the Capitol building in Washington – was ransacked by the very people it was  created by and for. These events, and many more like them have led to an undermining of trust and  confidence in the traditional institutions of Western society and economy, and a sense of almost unending  crises year after year.

Meanwhile, the much maligned internet bubble has expanded into a whole new universe – an undiscovered metaverse – ready to be explored, exploited, settled and built. This digital new world is  subject to no clear state dominion, dominated by global virtual private and corporate empires and led by  oligarchical space-faring billionaires speculating on trillions of dollars of digital assets, where states and  state-sponsored organisations indulge in digital forms of warfare in the search for a competitive  advantage. At the furthest frontier of this new digital world is the cryptoverse. Just like El Dorado and the  seven cities of gold in 16th century America before them, cryptocurrencies have reached mythic status in  the public psyche, offering the promise of riches beyond the wildest imagination for those brave enough to  seek them out. In the case of Bitcoin, it has been referred to by many as digital gold.

Digital adoption is a bottom up, societal-led change. When the utility of digital behaviours becomes greater  than the utility of analogue behaviours, individuals, organisations and society adopt digital behaviours.  Ways of organising, priorities, preferences and expectations also change. This is known as digital  transformation. The speed of change is defined by the utility gradient – the difference between the utility  of the analogue and digital behaviour. During the COVID-19 crisis, we were forced into an environment  where the utility of digital behaviours vastly outweighed those of traditional analogue behaviours,  accelerating the pace of digital change. When this happens, the institutions that serve and govern them  must react. The reaction from authoritarian and centralised regimes has been to use digital technologies as  a means of control and to spread their form of digital censorship and authoritarianism around the world. Authoritarian governments have proved successful in using digital technology to control, monitor and  manage populations. In China, the regime is working with social media companies to develop its social  credit system, and whilst the Chinese government says it is being deployed as a means of building trust,  many challenge this argument citing desires for control and surveillance. At the same time, those who seek  to defy or circumnavigate the authorities have had less success.

Meanwhile in the West, digital is seen a de-stabilising force – from social media’s role in the rise of  populism, Trump and fake news, to crypto as a wild and unwieldy force threatening to bring down the  financial system. “In empowering outsiders, digital technology destabilizes governing elites all over the  world and speeds up the pace of change”. The People vs. Democracy: Why Our Freedom Is in Danger and  How to Save It, Yascha Mounk, 2018. The fear over the potential impact of digital technology on  democracy goes further. Noah Harari argues that technology even threatens our human agency and  therefore the fundamental idea of individual free will that underpins Western Liberal Democracy. Yet  digital technology seemed to offer such promise just two decades ago. Why is it then that, at this point in  time, in the West, the digitisation of society is seen to have de-stabilised the established order, whilst

emerging authoritarian regimes seem to have taken it in their stride? We will attempt to answer this  question in part two which we will publish next week.

Are we to see two versions of digital intellectual property – an NFT and a DDC?