decline in the use of some legal services. After all, we seem to be increasingly surrounded by  algorithms and machines replacing humans in the execution of transactions, whereby  making business process more efficient, faster and hence potentially less risky for  companies which have historically relied on their staff. Yet, when smart contracts were first  being widely discussed many lawyers would often quip: “Smart contracts, they are not  smart nor are they contracts”.

• for a valuable right held by holders, and managed by the issuer

• easily readable by people (like a contract on paper)

• carries the keys and server information

• allied with a unique and secure identifier.”

Initially, smart contracts were seen as a way to automate transactions on a blockchain powered platform so were not treated as being a legal document or potentially enforceable. On the other hand, Ricardian contracts were designed to define the contractual relationship  between various parties and could be used outside a blockchain. As Limechain has  summarised, the difference between a smart and Ricardian contract is that: “A smart  contract is essentially a set of instructions on how to execute certain actions based on  whether certain requirements have been met. A Ricardian contract also provides the legal  framework that underpins all subsequent transactions that may occur under the contract. It  defines the parties in the agreement, the possible legal implications, and the relevant  legislation that can be used in case of a dispute.”

In the UK, the legal position of smart contracts has now been clarified. The Law Commission has issued a report confirming that, in order for smart contracts to be legally enforceable,  only “an incremental development of the common law is all that is required to facilitate the  use of smart legal contracts within the existing legal framework’. Furthermore, Professor  Sarah Green, Law Commissioner for the commercial and common law team, has added to  this and said: “Smart legal contracts could revolutionise the way we do business, particularly  by increasing efficiency and transparency in transactions. We have concluded that the  current legal framework is clearly able to facilitate and support the use of smart legal  contracts; an important step in ensuring increased recognition and facilitation of these  agreements.”

The legal uncertainty of smart contracts, in the UK at least, has been clarified. Meanwhile, the Bitcoin Blockchain has recently undergone an update, called Taproot. As reported by  Reuters: “the upgrade introduces a new digital signature scheme called Schnorr that will  help bitcoin transactions become more efficient and more private. Schnorr can also be  leveraged to let bitcoin users execute more complex smart contracts”. Clarifying the legality  of smart contracts will help many existing businesses which have, to date, been reluctant in  the adoption of Blockchain technology due to its uncertainty. In view of this, maybe one  sector to keep an eye on is derivatives, given this sector is one of the biggest assets globally.  As at June 2021, the value of the derivatives market was $610 trillion, compared to the total  value of all quoted equities of $95trillion. Worldwide, derivatives impact the entire economy. The International Swaps and Derivatives Association (ISDA) has been consulting  on the use of smart contracts for a while and has, presumably, been waiting on the type of  legal clarity now evident in the UK. Given the number of jurisdictions historically which have  relied on English law when conceiving their own laws, will we now see other countries  equally providing legal guidance as to the enforceability of smart contracts and so ushering in greater use of these digital and machine-programable instructions?

Blockchain in the property sector

Buy and selling property is time consuming, involves large amounts of paperwork and is  costly. Indeed, in the UK, the Land Registry advises: “The processing times for updating the  register (adding a mortgage or changing ownership) take about 4 to 6 weeks and creating a  new register transfer of part or new lease) take about 6 to 9 months”. 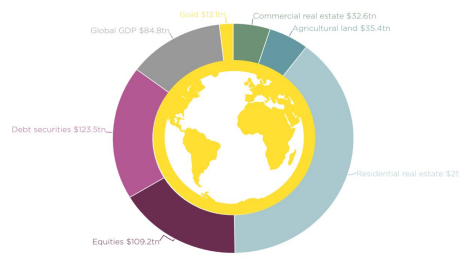 If you have ever bought a property, you will be only too aware of the parties involved – lawyers for the buyer, seller, and lender, together with estate agents (realtors in the USA),  surveyors, insurance, etc – the list seems to go on. Resultant from this are high fees and the  inevitable delays and time to gather and verify the requisite information. Using Blockchain  technology to buy and sell property can make this often tortuous process more efficient  whereby reducing the time it takes to buy a property and furthermore, seamlessly and  accurately recording and enforcing mortgage provisions and conditions in a far more  transparent manner.

Potentially, there are three ways that Blockchain technology can help:

1. Digitisation of property ownership interests – there is no reason why one cannot, in  effect, create a digital record of the details of a property, not dissimilar to a Non Fungible Token, (NFT) whether the real estate be a house or a commercial building.  A property digital record offers the promise to reduce the time it takes to buy and  sell a property and increase the liquidity of real estate which has, historically, been  classed as an illiquid asset. Undoubtedly, an extraordinary amount of due diligence is  required to identify lien priorities, ownership interests and marketability issues for a  particular property before a transaction occurs. However, all these details, as well as other information such as any insurance claims, planning issues, maintenance  records etc for the property, could be held then traded and transferred on a  blockchain-powered platform. The immutable nature of using blockchains means that the accuracy and trustworthiness of the data eliminates the time needed for  extensive due diligence and enables real estate to be immediately transferable.

2. Storage of documents on a blockchain ledger – under the current system, parties are  required to request title documents, relying on the fact that the necessary  documents are recorded correctly and that there has been no mismanagement  between transfers in the interim. By holding all the relevant real estate information  in one place and recording this data in a structured manner, it would be possible to  track and trace ownership interests of the data and be made available on a  permissioned basis for the relevant parties to have access. This would yield a clearer  record chain of title for a particular property, thus reducing costs and time to obtain  title reports between contract and closing.

3. Enforcing mortgage and loan provisions through smart contracts – mortgage  contracts are filled with complex contingencies, covenants and conditions that  trigger different default events when they occur throughout the life of the loan.  Upon the occurrence of a default event, the typical penalty is an increased interest  rate until the breach is cured. Smart contracts can automate this process with  greater accuracy (and more quickly) than the largely paper-based analogue systems  and process currently used.

As to be expected, there are challenges needing to be addressed before we see the wholesale adoption of using blockchain-powered platforms when buying and selling real estate. The different parties will need to agree to use a new way of carrying out property  transactions and, most importantly, each jurisdiction’s land registry would need to be

convinced that using blockchain-powered platforms are as safe and reliable as the existing  tried and tested systems. Dependant on the type of blockchain (private or public), this raises  a variety of challenges around how data is stored. Attention would need to be paid in order  to accommodate provisions such as GDPR in Europe, but also the fact that there is no  federal data privacy law such as GDPR in the US. There are, however, some national laws in  place to regulate the use of data in certain industries in the US, such as the US Privacy Act  (1974) which outlines rights and restrictions regarding data held by US government  agencies.

The real estate market is immense and any small savings that improve the efficiency of how  this market functions will need to be carefully examined. Whilst there are a number of firms  looking to offer some form of fractional ownership, the jury is still out as to how popular  and effective such offerings are. Blockchain technology certainly offers the promise to  fundamentally and radically alter the way property transactions are executed. Some  jurisdictions, such as the UK, have now given clarity as to the enforceability of smart contracts.

Banks and digital assets: from naysayers to pivotal partners