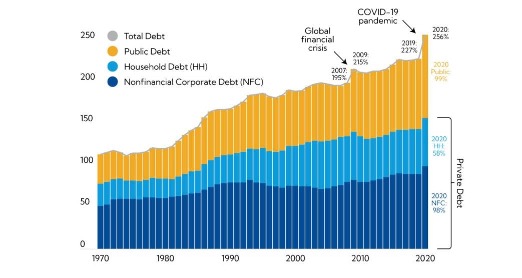 Given the title, you can be forgiven for possibly thinking – so how does this impact my business or me? Well unfortunately, when you borrow money you must usually pay it back and in 2020, according to the IMF, global debt increased by a massive 28%, surging to an all-time high of 256% of global GDP and reaching an incredible $226trillion.

Global debt as a % of the world’s GDP

The definition of inflation is that it is the result of too much cash chasing too few goods and, based on the inflation numbers that are being reported globally, it would appear that inflation is certainly rising. No doubt this will lead to a necessity in increasing interest rates which will make it harder for those governments, companies and individuals (which have become so indebted) to service their borrowings. So, why is this relevant to blockchain and digital assets? Well, we are increasingly seeing Blockchain technology being used when it comes to issuing debt instruments with several banks that have issued bonds using this technology:

The trend is clear – more and more institutions are using Blockchain technology to issue debt since it is proving to be more efficient and cheaper than traditional bond issues. Recently in another development, a German company called Cadeia, working with Bank Frick  (based in Liechtenstein), has been carrying out a corporate loan securitisation transaction on a blockchain-powered platform. As Constantin Ketz at Cadeia has said: “The complete transaction, including securities issuance and settlement, ongoing covenant testing, and rule-based cash flow management via predefined waterfall structures, is processed through a series of automatically created smart contracts on the Ethereum blockchain.”

The use of Blockchain technology to issue bonds and loan securitisation is significant for smaller business as well as for larger ones as it means that potentially small to medium-sized firms will be able to access the fixed interest markets. As the transaction costs are reduced it becomes more cost effective to have smaller debt issues.

Government debt as a % of GDP

We have already seen the UK increasing interest rates as it starts to temper inflationary pressures. The US is reducing its bond buying program and, no doubt, we will see interest rates being raised there in Q1 2022. Whilst a little scary, you may find the above chart interesting and if you click here, you can link to the IMF website and see how world debt has changed since 1950! So, whilst it may be getting cheaper to issue debt instruments, the challenge is how will all this debt get repaid or will inflation simply make it easier to manage and, in effect, destroy the value of those who hold the debt? Ultimately, who are the holders of debt? Typically pension funds and so-called lower risk investors?

Tipping Point: 2020 a year of Disruption and Opportunity.